Jon Stewart Trades Barbs With O’Reilly Over Fox News: Do Obama Scandals Give You ‘Sexual Arousal?’ 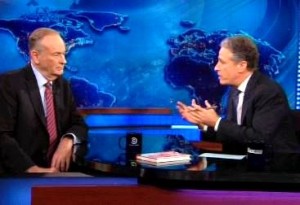 Bill O’Reilly stopped by The Daily Show for another round of pithy banter with Jon Stewart. Stewart credited O’Reilly and Fox News for finally having real Obama scandals to sink their teeth into, though he couldn’t resist the urge to get in a few barbs at the network’s expense, calling it “the organization of Sauron” and asking O’Reilly if Obama scandals are giving everyone at Fox “sexual arousal.”

O’Reilly started out the interview by bringing up the Department of Justice targeting Fox News reporter James Rosen, to which Stewart quipped that finally Fox has been recognized as true enemies of the state. Stewart did admit that this is a really troubling scandal to see the Department of Justice overreaching so much. O’Reilly wryly shot back, “Rosen’s on his way to Guantanamo now.”

Stewart told O’Reilly that after five years of constantly being on DEFCON 1 about Obama, it must be nice to finally have a scandal worth looking into. Stewart asked, “Is it joy? Is it sexual arousal?” O’Reilly noted that people are giving him heat for not being tough enough on Obama, and said that it looks like Obama “doesn’t know what’s going on in his administration.”

On the IRS scandal, O’Reilly guessed that the Obama administration decided to scare tea partiers after they did so well in the 2010 midterms. O’Reilly referred to this as “educated speculation.” Stewart blithely remarked that O’Reilly is “over there in hell” or “the organization of Sauron,” and mockingly suggested that being targeted might make them realize it’s unfair to target an entire group for the actions of a few based on political affiliation or religious background.

O’Reilly picked up on Stewart’s point, arguing that Muslim profiling is perfectly legitimate since there have been thousands of terrorist acts committed by Islamic extremists. Stewart pointed out there are thousands of gun deaths in the U.S. every year, and when O’Reilly asked how you would profile them, Stewart mockingly suggested Fox News viewers.