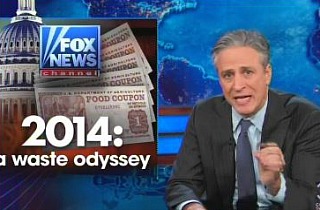 Last week, Jon Stewart took Fox News Channel to task for their apparent fixation with food stamp recipients being able to purchase sea food with their benefits. The Five co-host Eric Bolling shot back at “dummy” Stewart for those remarks and criticized him for minimizing the problem of welfare fraud. On Thursday night, the feud continued as Stewart responded to Bolling’s “schooling.”

Stewart said it was “reasonable” for Fox to be exposing government waste, but that was not why he was making fun of the network. “What we were ridiculing was the way you exaggerate the scope of public assistance abuse through random, often unprovable anecdotes,” Stewart said.

RELATED: Stewart: Why the Hell Is Fox News So Obsessed with Poor People Eating Seafood?!

Stewart hit Fox for creating the narrative that the poor are “just sh**ty people and those food stamps are just making them sh**tier.” He added that the network had found their “food stamp abuse bigfoot” in a surfer on welfare who has been featured on over six Fox programs. Stewart admitted that there is an estimated $3 billion in welfare fraud.

Stewart then played a series of clips of Fox hosts and contributors defending “job creators” who are also recipients of government subsidies. “So, what I’m getting from Fox is this,” Stewart concluded. “Exploiting government largess, while morally reprehensible and corrupting for an individual is a-ok for corporations.”

Watch the segments below via Comedy Central: