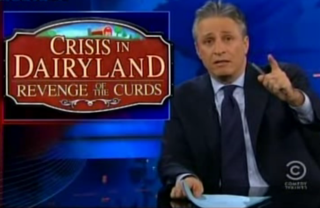 The nation is closely eyeing the loud Wisconsin union protests that have pitted workers against the state’s Republican governor, Scott Walker— or, as Jon Stewart described him tonight, the “pleasant, casually-dressed man” out to turn the unions into merely “a bunch of people wearing identical t-shirts.” On tonight’s Daily Show, Stewart tried and failed to see Walker’s side of the story, but was far more outraged with comparisons to the Egyptian revolts or 9/11, especially when there’s always Charlie Sheen.

Stewart argued that taking away collective bargaining privileges from unions rendered them completely useless– “it’s like telling Craigslist ‘no adult services'”– and hammered Walker (and his interview on Fox News Sunday) for his uncompromising take on the situation. On the other hand, he wasn’t a big fan of the protesters’ public relations prowess, as one lady interrupted an uncontroversial question from a CNN reporter to “get all chanty on her”– “Hold on,” Stewart joked, “we have a satellite delay to the ’60s.”

He then took a look at how the media was trying to find a niche for these protests in the current news cycle– namely the comparisons to Egypt, Libya, Tunisia, etc. “They are not the same in any fucking way, shape, or form, at all,” he corrected a montage of reporters excitedly connecting the dots. Accusing them of trying to attach the protests to “the last story you saw on TV,” Stewart did the same with his last story, “the struggles of Charlie Sheen, bravely fighting his addiction.”

He concluded with a look at what Fox News was up to– compared, of course, to the opinions on MSNBC. Turns out they are in diametric opposition to each other! And, if you flip the scenarios, they’re precisely what the other said about the Tea Party protests last year, leading Stewart to conclude, “the union Wisconsin protest is the bizarro Tea Party.”