Jon Stewart: U.S. May Be ‘F**ked,’ But At Least We Don’t Have Meteors And Horse Meat In Our Burgers
video

Jon Stewart: U.S. May Be ‘F**ked,’ But At Least We Don’t Have Meteors And Horse Meat In Our Burgers

Stewart: U.S. May Be 'F**ked,' But At Least We Don't Have Meteors & Horse Meat In Burgers
Twitter share button 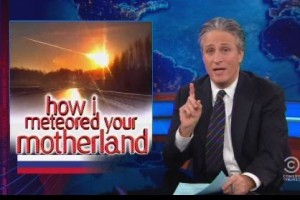 Jon Stewart reassured Americans concerned with the state of the country by putting our woes into perspective: the economy may be in a rut and the president may have unclear jurisdiction to target Americans with drones, but at least we don’t have meteors exploding in the sky over us or eating burgers with horse meat. Or, as Stewart put it, “we may be fucked, but at least God isn’t hurling rocks and loose horsemeat at us.”

Stewart first took on the growing scandal in England over horse meat found in Burger King burgers, saying that at least Americans can expect grade A ground beef that’s processed and assembled in factories. Only three countries on record eat horse, Italy, France, and Kazakhstan; the latter led Stewart to create a new dish: KFH (Kentucky Fried Horse). “If the bucket doesn’t look at you, it’s free.”

However, Stewart was disappointed to only hear that horse was only found in one percent of cases, which Stewart put on par with “one percent horse milk” or “the world’s lamest centaur.”

Stewart then turned to the meteor that exploded over Russia, but what interested Stewart more than the meteor itself was how Russians reacted to it. He showed how the only reason there is so much footage of the meteor is because cars in Russia have cameras installed on the dashboards. After seeing one Russian’s unfazed reaction to the exploding meteor, Stewart asked, “Is everyone in Russian society just that jaded?”

But then Stewart showed clips of other weird car-cam moments, and could only conclude that Russians see “so much crazy shit,” a meteor isn’t really that surprising.