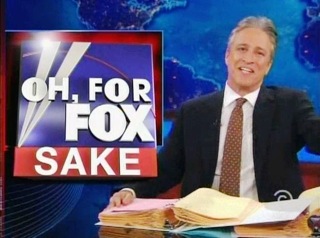 In case Jon Stewart hasn’t made this perfectly clear several times, Jon Stewart appeared on Fox News to debate Chris Wallace on his program two weeks ago, where he was accused of being an “activist” rather than a comedian, and was accused of repeating falsehoods by claiming Fox News viewers are “consistently the most uninformed.” Stewart had copped to the mistake with a segment dedicated to Fox News’ falsehoods, but this was apparently not enough: he gave Fox News his entire second segment yet again, concluding, with Wallace’s words, that they are “crybabies.”

Stewart’s wrath was triggered by Wallace jabbing once again at the Daily Show host, who corrected himself from having told Stewart Fox News tells “the other side of the story” vis-a-vis MSNBC. “I wish I would’ve said ‘the full story,'” he said on Sunday. Stewart seems to have been incensed by Fox “playing the victim” to him when he expected Wallace “begin the work of apologizing for all of Fox News’ misstatements.” Instead, Wallace gave the preceding apology, which Stewart interpreted as “I accidentally told the truth and wish I could take it back.”

He then went through another series of what he considered to be Fox News falsehoods– this time in a large three-ring binder– only to come back to the interview and make a political point: “that narrative of conservative victimization is the true genius of what Fox News accomplishes,” explaining that Wallace thinks Stewart is an activist because “I make fun of liberals or Democrats because I want to maintain enough credibility to make fun of conservatives and Republicans.” He concluded with Wallace’s own words, redirecting them at Fox: “the biggest bunch of crybabies I have seen in my 30 years in Washington.”

Perhaps Stewart ran the segment because it’s the end of June, and the summer news cycle is as cruel and dry as any desert drought. But a third segment with the same “joke” of reading things he interpreted as Fox News falsehoods, followed by his “joke” of explaining how he has been defined by the network, is getting pretty close to “thou doth protest too much” territory, or at least the “Please stop talking about Donald Trump, Lawrence O’Donnell” realm. One more attack straight at Fox News, and it’s time to reconsider what the difference between a “comedian” and an “activist” is.