Jon Stewart On WI Recall: ‘The People Have Been Soundly Defeated By Other People’ 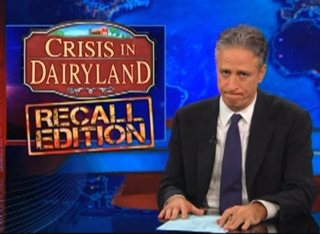 Midwestern populism is certainly a topic that doesn’t get all that much play on the Daily Show, but when it does, Jon Stewart makes sure to point out how hard it is to follow the will of the people. If the Tea Party were “the people” in 2009, and “the people” staged a recall election against Republicans in Wisconsin, where Democrats were defeated by “the people,” then… who are The Real People?

Stewart began with a reminder of the raucousness of 2009-10 Tea Party rallies, jokingly answering several protesters demanding their country back: “this is a terrible misunderstanding; we were told it was a timeshare.” He then turned to the next big populist movement: the Wisconsin recall, which he found plenty of MSNBC personalities raving about as one of the greatest political events of modern history. Then he turned to one MSNBC host in particular that had a special message for the union protesters: Al Sharpton, who could not escape ridicule for his “resist we much” gaffe. “That was either a screw-up,” Stewart joked, “or some profound Yoda shit.”

Stewart then turned to the actual people on the ballot, which he joked belied the intensity of the political struggle by looking so pleasant. “People from the Midwest,” he remarked, “no matter what their political stripe, never looks like assholes. They all look very nice.” He contrasted candidates Sandy Pasch and Alberta Darling with New Yorkers– “that’s the problem with us here in New York– we’re very pleasant but we all look like assholes.”

After all the turmoil, Stewart noted that the populist movement towards the recall had been defeated by another apparent populist group against it. “The people have been soundly defeated by other people,” he quipped, “you’ve got to feel for the people.”