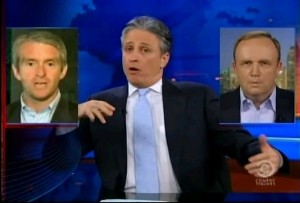 Reporting live from dangerous areas around the world is stressful and, as such, such harrowing work can eventually really get to a person, y’know? We suppose that’s why it’s so tempting to let off a little steam by hitting rival networks’ correspondents with the verbal equivalent of smacking them about the face with one’s glove.

First, a little background: Robertson called Fox News’ claim that journalists were used as human shields “outrageous and absolutely hypocritical.” Then, it was revealed that Harrigan may have not, as he had stated earlier, seen the invitation by the Libyan Ministry of Information’s as merely “propaganda,” given he had sent a bodyguard with a camera on their tour. Harrigan later opined that perhaps Robertson had a “screw loose.” Basically: Neither will be crafting a friendship bracelet for the other anytime soon

Stewart kicked off his “When Reporters Attack” segment by showing Nancy Grace‘s shouting match with an Accuweather reporter over whether the threat posed by the damaged Daiichi power plant in Japan will result in Americans popping and sizzling in their beds like so many strips of bacon.

Stewart then commented on the Fox News v. CNN kerfuffle, noting how Fox News was able to get a dig in at CNN by implying that their own reporters had not accepted an invitation by pro-Gaddafi forces for fear of becoming human targets – unlike CNN reporters, who routinely strangle bald eagles with American flags.

As the facts surrounding that decision began to make Fox News’ original story more convoluted, Robertson took a jab at Harrigan, saying he can be seen having breakfast more often than he’s witnessed working on the field. Sick burn, bro! Harrigan responding by calling Robertson “dull.”

The show’s own senior Libya correspondent, Jason Jones, then weighed in with his own experiences.