Jon Stewart: Why Does Wall St. Hate Obama When ‘They’ve Had It As Good As Anyone’?
video

Jon Stewart: Why Does Wall St. Hate Obama When ‘They’ve Had It As Good As Anyone’? 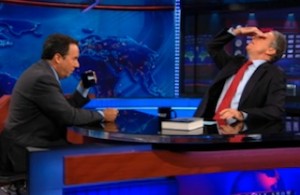 Author Ron Suskind appeared on The Daily Show last night to promote his controversial new book Confidence Men which takes a pretty critical look at the first two years of the Obama administration. As is often the case with interesting interviews, host Jon Stewart continued the discussion beyond the time allotted for the third segment of the show, eventually publishing some very interesting dialog that never made air. Case in point: the discussion of Treasury Secretary Tim Geithner and Wall Street’s seemingly strange perception of President Obama.

Stewart comes back from the “commercial break” to ask Suskind about the curious role of Obama’s economic team — in particular Larry Summers (who Stewart claimed is unanimously considered an a**hole) and especially Geithner — who had been asked by the president to draft an economic plan, but when asked for it by Obama, had bupkus. The rather stunning fact that Geithner is still in office led to the following comment made by Stewart:

“We keep hearing that the Wall Street guys hate Obama, and my sense is ‘why?’ They’ve had it as good as anyone in this country over the past two and a half years, probably better. What’s their beef?” Suskind claimed that in a private conversation with a “senior Wall Street guy” about this very issue, the unnamed individual admitted that “of course (Obama) isn’t anti-business, but that when we say he’s anti-business, he just ends up doing more for us.”

This is a diametrically different narrative that is more commonly promoted on leading cable channels and right-of-center Internet outlets, that somehow Obama is promoting a socialist or radical agenda. Wall Street understands that, as Suskind claims, Obama has basically opened up the purse to the financial community, and yet he is being vilified by many as anti-business.