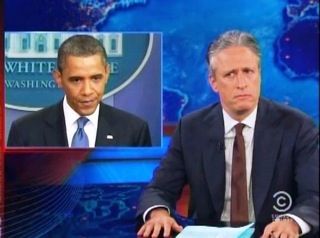 On August 2nd, America could very well default on its debt. On tonight’s Daily Show, Jon Stewart reported on what Congress was up to instead– “re-fighting a lightbulb standards fight that we settled in 2007.” With Congress acting like “children” and the nation “three weeks away from having to park our country down the street so China can’t find it,” President Obama– or as Stewart called him, “Dad”– had to come and tell the nation’s legislators to “eat our peas.”

“You begin to think President Obama is the first president in history that begins every press conference with a heavy sigh,” Stewart joked as he played a clip of President Obama telling Congress that the budget debate must end on time, and that it’s time for Congress to “take off the band-aid and eat our peas.” That talk Stewart described as “dad, much to his chagrin, [coming] home early from work and giving us a talking-to about not cleaning up our budget,” which, he noted, appeared to result in little since Republicans in the Senate and the House seem to have a bit of a communications issue.

For one, Senate GOP leader Mitch McConnell argued last weekend that “no one is talking about not raising the debt ceiling”– no one, Stewart noted, except for House Speaker John Boehner. And the reason some Republicans may believe they have a chance at getting a plurality to vote in favor of freezing the debt ceiling? Senator Obama did in 2006.