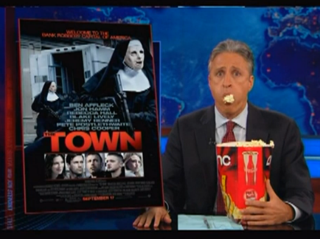 Because it’s impossible not to, much of the media pointed and laughed at the news that House Majority Whip Rep. Kevin McCarthy used a clip from the Ben Affleck film The Town to inspire them to vote on the Boehner bill. Tonight, Jon Stewart wondered whether the ones who actually got any inspiration from the clip had actually seen the end of the film, because the analogy was not so flattering to the Tea Party.

Just the news that The Town was the film of choice was enough to confuse Stewart. “The Town?” he asked several times, wondering why The 300, Blindsaw, or any of the Rocky movies weren’t chosen. “You went with the Boston bank robbers in gun costumes flick,” he deadpanned.

When he played the actual clip– of Affleck asking Jeremy Renner‘s character to aid him in “hurting some people” without asking questions, with the latter unblinkingly following– Stewart seemed even more perplexed. “I’m going to assume the Tea Party coalition has not seen the whole movie,” he suggests, since Renner’s character, as he explains, is a mentally unhinged criminal, and Affleck uses him uncomfortably to achieve his ends, but without much respect. That didn’t seem to stop Rep. Allen West from immediately saying he was “ready to drive the car”– Renner’s response to Affleck’s request. “Quick, to the batshitmobile!” exclaimed Stewart.

But there was some silver lining to the story– it meant that Sen. Chuck Schumer got to read the plot of The Town in an event aloud, in dramatic reading form, glasses at the tip of his nose. Concluding his own version of the Sen. Schumer movie review, Stewart noted, “that must be the worst DVD feature extra ever,” before delivering a Schumerized review of Star Wars.