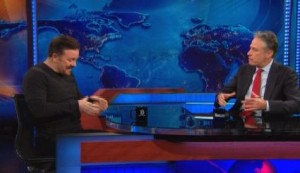 RELATED: Ricky Gervais Is As Wicked As Ever In His Return Golden Globes Monologue

Gervais appeared on the program ostensibly to promote his HBO show Life’s Too Short, but for some strange and wonderful reason, the topic hilariously veered into the explicit particulars of saucy, gooey panda sex.

“The thing is — right now, pandas are one of the most endangered species on the planet, right?” Gervais observed. “We’re all rushing around going let’s save the panda but they’re not meeting us halfway. They’re not having sex so that’s fundamental to surviving. When did they stop having sex? Why are they so like middle-class bohemian going, ‘we’re not going to have children!’ It’s ridiculous. This is true, don’t get me started on the Chinese! They’re so worried about the panda — the national emblem, right — that they started giving their pandas in captivity, Viagra. That’s absolutely true. and I looked into this, right? The normal copulation of a panda is two minutes. Which is fine, I think, about right, isn’t it?”

“That doesn’t sound endangered to me,” Stewart interjected.

“Yes! Get it done, right?” Gervais continued. “Now, but on Viagra they can copulate for 30 minutes!”

Stewart was giddily repulsed by this suggestion.