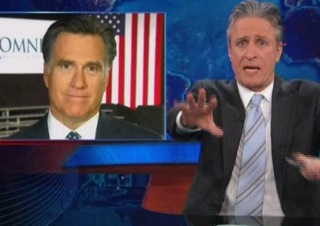 Mitt Romney was off to a bad start this morning, as he began the day telling CNN’s Soledad O’Brien that he was “not concerned about the very poor.” Jon Stewart happened upon this clip in horror, trying to understand what Romney was getting at. The best he could do was to imagine Romney as a doctor unconcerned about the “very sick because, you know, morphine.”

Stewart first played the clip of his exact quote, and his explanation that the very poor have “nets” to catch them. “The reason the net is there is that they’re not okay,” Stewart explained. “It’s like a doctor saying ‘I’m not concerned about the very healthy… or the very sick because, you know, morphine.”

Stewart then played the rest of the clip, where Soledad O’Brien challenges Romney’s claim and asks for a clarification, because it sounded “odd.” This left Stewart flabbergasted, since a TV anchor actually asked an explanation from a politician. “It’s like a flower blooming in the desert!” He beamed. “Quick! Someone pick that up and take it away from CNN before a giant holographic screen falls and crushes her!”

He then went back to the explanation from Romney, which seemed to not help at all. Stewart took the time to explain. “Being in a net is bad, whether you’re a butterfly, or a fish, or a trapeze artist, or a poor person,” he concluded. “If you’re in a net, something has gone terribly, terribly wrong.” He then went on to play the rest of Romney’s explanation, where he notes that “it’s not good, being poor.”

“They’ve got the play tennis on public courts!” Stewart joked. “I can’t imagine the thread count on their linens!”

The segment ends with the two classes, “Very Rich” and “Very Poor,” singing about how they are nothing alike. And by “these two classes,” they mean correspondents Jason Jones and John Oliver.

The video via Comedy Central below: