Jonah Goldberg: Media Has A ‘Nagging Insecurity’ Over ‘Cheerleading’ For Obama In 2008 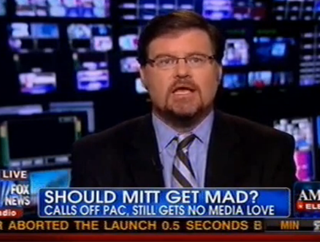 The story of a Super PAC planning on resuscitating Rev. Jeremiah Wright as a campaign issue has raised questions on both sides of the aisle– from the ethics of doing so to why the mainstream media avoided the topic. On Fox & Friends this morning, Jonah Goldberg noted that he found in the mainstream media a “deep, nagging insecurity” about the way they handled the 2008 campaign, one that has made them somewhat hesitant to bring up issues from 2008 that could politically help the President.

The discussion began with host Dave Briggs noting that President Obama “has accepted a lot of money from Bain Capital” despite attacking Romney for his time working at the corporation. Goldberg explained the tactic: “taking his strongest issue, which is his experience in the private sector, and turning it into a weakness.” “What bothers me in this climate,” he added, “is the incredible media double standard” that makes media figures say that talking about Wright “would be outrageous and disgusting.”

“You sound almost surprised!” added Clayton Morris, noting that being around for things like the Swift Boat Veterans for Truth campaign should be enough to not be shocked that Bain or Jeremiah Wright would be talking points in a campaign. The key to the story, Goldberg replied, was the media’s reaction to these campaign tactics, not just the tactics themselves. “There is a deep, nagging insecurity in main parts of the mainstream media in how they were such cheerleaders for Obama in 2008,” he noted, meaning they dislike bringing up certain stories because they “dont like the idea of opening the Pandora’s box and reminding people how much in the tank they were in 2008.” This includes the story that broke this week about a biography of the President from 1991 saying he was born in Kenya. “I’m not a birther,” Goldberg noted, “but it goes to show how the press just ignored all this stuff… Obama’s own biography.”