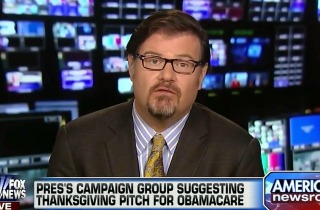 The White House and Affordable Care Act supporters are arming like-minded Americans with a set of pro-Obamacare talking points ahead of the Thanksgiving holiday in the hopes they may convince their family members to abandon their skepticism. On Tuesday, National Review editor at large Jonah Goldberg insisted that this strategy could “backfire” because so many, he says, will resent having to endure an ACA pitch session from their family members over the holiday table.

“It might be smart,” Goldberg conceded of the plan to create a viral word-of-mouth marketing campaign for the ACA over the holiday weekend. “That said, I find it incredibly creepy.”

Goldberg added that, while Affordable Care Act supporters are being informed by Organizing for America that their family members view them as the “voice of reason,” most will view that kind of holiday proselytization “annoying.”

Goldberg warned that the deluge of bad news surrounding the ACA’s implementation could “harden” opinions against the law, something that the White House wants to combat with this talking point initiative.

“What I don’t like, though, is this creepy, instinctive impulse to intrude politics and the government into every nook and cranny of our lives,” he added. “Remember, the Obama campaign once asked its supporters, in lieu of getting wedding presents, give people a donation to the Obama campaign in your name.”

“I don’t want to go home for Thanksgiving and have people reading from a printed out set of talking points at me,” Goldberg concluded. “I think this could backfire on the administration because it just seems so heavy-handed.”