Jonathan Alter Responds To Fox On MSNBC: Ailes Is ‘Stung’ That I ‘Called Them Out For Their Lies’
VIDEO

Jonathan Alter Responds To Fox On MSNBC: Ailes Is ‘Stung’ That I ‘Called Them Out For Their Lies’ 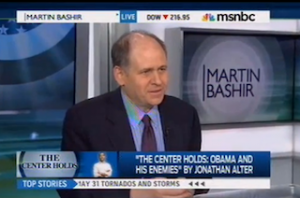 This afternoon on MSNBC, Martin Bashir read a statement that Mediaite obtained from Fox News to his guest, author and MSNBC analyst Jonathan Alter. Alter strongly pushed back against claims from the Fox spokesperson that elements of his new book, The Center Holds: Obama And His Enemies, concerning Fox president Roger Ailes are “factually inaccurate and are in fact complete, outright fiction.”

“Well, I guess the question is who do you believe, me or Roger Ailes?” Alter asked. “You know, he says I have no sources for this. All my sources are current or former Fox News employees. You’ll notice that he never actually denies a specific charge.”

Or, as Bashir put it, Fox was employing the strategy of “blanket condemnation–‘It’s all rubbish.'”

On the Fox spokesperson’s charge that Alter’s new book “has absolutely no buzz and he’s having trouble getting interviewed by legitimate news outlets” the author pointed out that he has appeared on NBC News twice to promote it. “So the statement is just kind of riddled with its own factual inaccuracies. Why are they doing it?” Alter asked. “Because they’re a little bit stung. There have not, until now, been books that directly went at Fox News and called them out for their lies and what they’ve done to the news business in general over the last 15 years.”

“There’s a slight kind of irony here,” Bashir remarked, “because it sounds as if Mr. Ailes actually believes he’s the subject of the book, when in fact it is the president. And that seems to be a problem.”

And oops. Perhaps someone in the graphics dept. at MSNBC needs to read the book to get Roger Ailes’ name spelled correctly (see below):