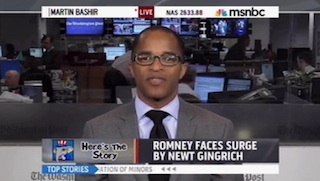 My 12th grade English teacher once told me that “literature is nothing but metaphors.” Whether you agree with her or not, it’s clear that she could just as easily have been talking about punditry. There’s no better way to condense a potentially complicated idea into a quick TV-ready sound bite than with a good, pithy comparison. Hell, there’s a reason that The Five‘s Greg Gutfeld constantly seems like he’s trying to copyright the phrase “strained metaphor”; these things are important. So, it seems within our duty to offer congratulations and appreciation to those pundits who come up with one that’s especially clever and, today, the clear Analogy of the Day winner is the Washington Post‘s Jonathan Capehart who compared Newt Gingrich’s resurgence to the continuous resurrections of famed movie killer Jason Voorhees.

“Poor Mitt Romney. He’s been running for president for a very long time. He’s run, actually, a very good campaign; Steady Eddie and letting them fight amongst themselves. But he didn’t anticipate that Newt Gingrich would come into the race and flaming out and coming back like Jason from the Friday the 13th movies.”

It’s such an apt comparison. Can’t we all imagine Romney, exhausted after a tough race, relaxing on a canoe only to have Gingrich, shirtless and misshapen, lurching out of the water to pull his opponent underneath.

Now, Capehart’s comment may seem insulting to some but it could be worse. At least he didn’t compare Newt to Freddy Kreuger. That guy occasionally had to get peed on by a dog to come back.