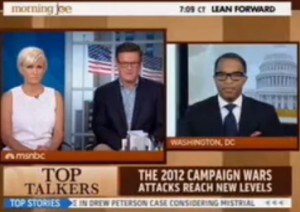 Mitt Romney‘s presidential campaign has been milking Vice President Joe Biden‘s “chains” remark like a dairy farmer with tapeworm, but on Wednesday morning’s Morning Joe, Washington Post columnist and MSNBC contributor Jonathan Capehart gave host Joe Scarborough a little bit of perspective on the outrage, ticking off the litany of racially-charged attacks that Republicans, including Mitt Romney, have been leveling at the President for years.

There has been a considerable amount of back-and-forth between the campaigns since the Vice President told a Virginia crowd that Republicans wanted to “unchain Wall Street” and “put y’all back in chains,” with conservatives suddenly becoming attuned to racial subtext. Following a clip of Biden spitting the outrage back in the GOP’s face, Capehart weighed in.

“When I saw Andrea Saul’s statement about Vice President Biden’s comments,” he said,  “I rolled my eyes, because we have been looking at a campaign, and in some instances the candidate himself, engaging in some somewhat racially insensitive things.”

“You’ve got Newt Gingrich who consistently calls the President a food stamp president,” he continued. “You had Mitt Romney say to donors in Montana, after speaking to the NAACP saying how he would repeal Obamacare, saying if you want more free stuff vote for Obama. And then you have this welfare ad coming out that’s completely false.”

Capehart didn’t respond to Scarborough, but Joe probably already knows the answer to those questions. The shelf life for playing dumb about food stamps and racism expired when Romney Welfare Queen Czar Newt Gingrich singled out “the African American community” for being “satisfied with food stamps,” and Romney similarly gave away the welfare attack with his NAACP speech and “free stuff” follow-up. Wingnut bloggers can still feign ignorance, but grown-ups with grown-up shows cannot.

Capehart continued, conjuring Birther-in-Chief and Romney campaign surrogate Donald Trump and the racist Birther conspiracists, Rep. Allen West explicitly accusing the President of bringing back slavery (Scarborough delivered the Breaking News that “Allen West is black.”), and the way the President’s legitimacy has been questioned “since day one.”

“I understand why the Obama campaign would be angry, being yelled at, being lectured to by the Romney campaign about a ‘campaign of divisiveness and hate,’ which is what they have been getting from the republican Party, and the Romney campaign in particular, for quite a long time.”

Co-host Mika Brzezinski asked “Are you saying they’re giving it back now?”

“No,” Capehart responded, “I’m saying I think they are right to defend themselves, I think Stephanie Cutter was right to not back down. Joe Biden spoke inartfully, but I don’t think he has anything to apologize for.”

Capehart’s list was extensive, but far from comprehensive. The media has given the Romney campaign a complete pass on their welfare lie, even when their own surrogate admitted it was a fantasy, and they have completely ignored RNC Chairman and Buster Bluth lookalike Reince Priebus‘ carefully-chosen (and self-consciously repeated) language regarding their Medicare lie. When was the last time you heard a President accused of “stealing” for saving costs on Medicare, or any government program?

The purpose of the feigned outrage at Joe Biden isn’t actually to extract an apology, or even to shame him. It’s all about providing a smokescreen for their own race-baiting, to normalize their own campaign of hate.