The news that University of Missouri defensive lineman Michael Sam could soon become the first openly gay player in the National Football League has caused renewed interest in recent comments by New Orleans Saints (and former New York Jets) linebacker Jonathan Vilma. In a Feb. 2 interview, Vilma indicated that he might be uncomfortable showering with a gay teammate. After Sam’s announcement, Vilma appeared on CNN’s AC360 to clarify his comments.

In that Feb. 2 interview, Andrea Kremer asked Vilma how he thought an openly gay player would be received. “I think that he would not be accepted as much as we think he would be accepted,” Vilma replied, adding “I don’t want people to just naturally assume, like, ‘Oh, we’re all homophobic.’ That’s really not the case. Imagine if he’s the guy next to me and, you know, I get dressed, naked, taking a shower, the whole nine, and it just so happens he looks at me. How am I supposed to respond?”

Those comments have received renewed attention on the heels of Michael Sam’s coming out, so Vilma decided to set the record straight, clarifying his remarks to AC360 fill-in host John Berman. In an exclusive interview, Vilma explained that Sam has “done a tremendous job, it says a lot about his character and who he is as a person. It’s a simple change, people are resistant to change at times. And it’s not just as simple as coming into a locker room. So my words, it was a poor illustration of the example I was trying to give on the context. So I do apologize for that.”

Vilma added that he “was trying to explain that whenever you have change into something that’s been set in stone for so long, or you’ve had something that’s been going for so long, that change always comes with a little resistance. And it was a poor choice of an example that I used, so I do apologize for that. But I was trying to explain that whenever you present someone like a Michael Sam, who is extremely, extremely confident and a powerful man in himself, with his own — within his own right, into an NFL culture that’s used to one thing, there’s going to naturally be that first level, first wave of resistance before you have the transition.”

Asked what he would say to his teammates if Sam were drafted by the Saints, Vilma replied “There’s really nothing to say. The first thing that matters is, can he play football? So when he steps into the locker room, he steps on the field my concern is getting him lined up and making sure that he knows the call, and he can go out there and play football. And he can play to our ability or to our expectations.”

Vilma was full of praise for Michael Sam, but the subtext of Vilma’s comments, when contrasted with those he made to Kremer, seems to be that a gay player’s level of talent makes all the difference in the world in how he will be accepted. That’s a step up from the initial reaction from some in the league, but not much progress from the hurdles that trailblazers like Jackie Robinson faced. If you’re a gay third-string kicker, keep your eyes down in the locker room.

For his part, John Berman conducted a great interview, but someone should really ask the show’s producer what was up with this split-screen, as Vilma talked about Sam’s acceptance in the locker room: 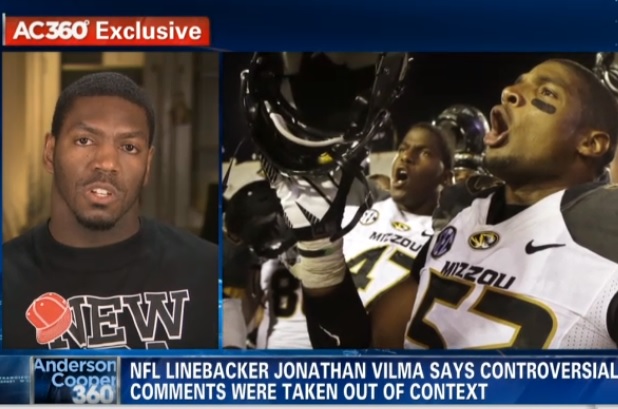 Here’s the full interview, from AC360: