Jordan Davis’ Parents React to Dunn Verdict: ‘In Some Way, Shape or Form, He Will Pay’ 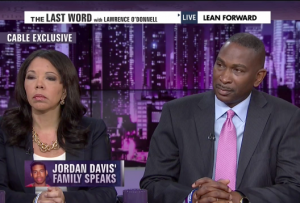 Ron Davis and Lucia McBath, the parents of Jordan Davis, reacted to the verdict that convicted Michael Dunn of second-degree murder but not first-degree on Lawrence O’Donnell‘s show Wednesday night. They said they were shocked and heartbroken at the miscarriage of justice, and were joined by their lawyer John Phillips, who told O’Donnell the jury “gave the benefit of the doubt to the Caucasian businessman.”

O’Donnell brought up the interview a juror in the case gave to Nightline, in which she revealed that the vote was 9-3 for conviction of first-degree murder. McBath didn’t feel any ill will towards the jury, saying they “put their heart and soul” into deciding this case.

Both parents were frankly stunned by Dunn calling himself the “f*cking victim”, with Davis saying, “The victim was the one that had a bullet go through his lungs.”

O’Donnell appeared to tear up a bit while bringing up the overwhelming response the Davis family has been getting on Twitter, and asked them what they would say to Dunn if they had the chance. McBath said she’d tell him, “Not only did you take Jordan’s life but you took my future.” And she believes that no matter what the final outcome on the first-degree murder charge is, “in some way, shape or form, he will pay… because he’s going to spend the rest of his life in jail.”