Jorge Ramos Grills Ted Cruz: ‘Do You Have a Latino Problem?’
VIDEO

Jorge Ramos Grills Ted Cruz: ‘Do You Have a Latino Problem?’ 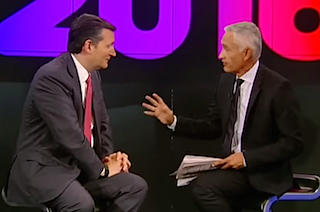 Does the Canadian-born presidential candidate of Cuban heritage have a “Latino problem?” That was just one of the tough questions that Fusion’s Jorge Ramos asked Sen. Ted Cruz (R-TX) when he visited his primetime show Tuesday night.

Cruz began by heralding the 40% of the Hispanic vote he received when he ran for the Senate in Texas, but Ramos quickly pointed out that in a recent poll, only 24% of Latinos would even consider voting for him for president in 2016. As the candidate began to push back, Ramos told him that what has many Latinos “concerned” is that is not in favor of a path to citizenship nor President Barack Obama’s executive action that protects immigrants from deportation.

“I support the rule of law,” Cruz replied. Rather than answer Ramos’ question about what to do with the DREAMers, he posed a question on his own. “Why do so many people come to America from other countries?” Cruz asked. “They come here for opportunity, but they also come here for rule of law.”

When Cruz compared Obama’s executive action to “what dictators in other nations have done,” Ramos cut him off, saying, “That’s what your father said, also.”

Just this past weekend, Rafael Cruz said at a conservative summit, “We are seeing today a president that operates by executive order, by fear, not much different than that bearded dictator I left in Cuba almost 60 years ago.”

“Many people don’t understand why, senator,” Ramos pressed, “if you’re the son of an immigrant, of a Cuban-American, why don’t you try to help 11 million undocumented immigrants who are in this country and are just immigrants like your dad?”