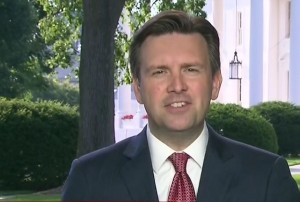 The Republicans’ fetish for the term “Radical Islamic Terrorism” is the talking point that refuses to die, with a little bit of recent help from the FBI’s decision to redact portions of the Orlando shooter’s conversations with police, and subsequent reversal. On Tuesday morning’s edition of CNN’s New Day, anchor Chris Cuomo interviewed White House Press Secretary Josh Earnest on the Senate’s failure to act on gun control in the wake of the shooting, but on the way out of that interview, he asked Earnest about the Phrase That Pays.

Earnest’s response to the question was to literally laugh out loud, before explaining, for the umpteenth time, that saying the words “Radical Islamic Terrorism” doesn’t actually do anything:

Cuomo: The President’s speech, while seen as effective on many different levels, didn’t move the needle much on Islam, radical Islamic terror. People feel he doesn’t say it because he is afraid of dealing with this problem, that he lacks a fundamental toughness about calling it what it is. He didn’t move the needle on that, Josh. People look at Orlando and say well, this is a reflection of that weakness as well. Fair?

Earnest: No, Chris. It is outrageous, actually. The truth of the matter is, the individuals who spend their time talking about radical Islamic terrorism are individuals like Republicans in the Senate who voted against legislation that would prevent those individuals from being able to buy a gun, and individuals who have not actually put forward their own strategy for keeping the country safe. Using the term radical Islamic extremism is not a counter-terrorism policy. It is a talking point.

My first reaction was to roll my eyes when Cuomo said that “people” feel anything at all about this idiotic talking point, but despite the fact that the President received the highest approval rating for his response to the Orlando mass shooting, his approval numbers on terrorism remain much lower than they should be. Allowing this talking point to fester has created a din that doubtlessly affects the perceptions of Americans who don’t pay that much attention to politics ordinarily, but whose ears perk up when there’s a terrorist attack.

The talking point is laughable, but what isn’t funny is that the Obama administration has been explaining itself for going on two years now, and still seems as happy with their response as they were the first time I suggested they defuse it:

Hillary Clinton tried to do just that last week, and so did President Obama, and so did Chris Cuomo even, but the FBI gave the talking point an unnecessary assist this week. The mistake the Obama administration has made is in thinking that just because something is stupid means it’s also unimportant, an error that’s compounded by a circle of followers who stubbornly insist the same. If they had attacked this talking point more directly all along, and/or been even a little bit less conspicuous in their adherence to this nomenclatural preference, the President and his supporters wouldn’t be wasting time on this now.

Since they are, though, they really ought to go on offense, and start bringing it up themselves. You want a three-word phrase, a-holes? How’s this: Seal. Team. Six. We’re not fighting Rumpelstiltskin here, we’re fighting terrorists. You find me one dead terrorist with an exit wound in the shape of the words “radical Islamic terrorism,” and I’ll think it over.

More broadly, though, the Obama administration and the Democrats really need to adjust their thinking, and begin to take seriously whatever it is they feel like laughing most loudly at, because those are the things that inevitably become the biggest problems. Remember the Tea Party, and all those cringeworthy town hall meetings featuring Medicare recipients railing against government healthcare? That was hilarious too, until we were passing Obamacare by the skin of our teeth under reconciliation.

Think about that, and everything in between, the next time you feel like smugly congratulating Democrats for ignoring some “contrived” outrage, because it’s the people who only ever hear the loudest of political noise who decide elections in this country.