Journalist Chris Hedges Argues With CBC’s Kevin O’Leary: ‘This Sounds Like Fox News And I Don’t Go On Fox News!’ 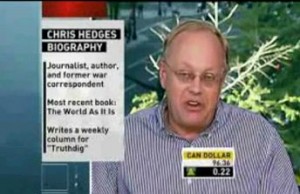 “If you want to shut down every corporation, every bank, where are you going to get a job? Where are you gonna work? Where’s the economy gonna go?” O’Leary barked. Hedges calmly refuted O’Leary, telling him that Goldman Sachs didn’t manufacture anything. “They gamble, they use money, and they believe falsely that money is real as we dismantle our manufacturing base and send jobs over the border to Mexico and finally into the embrace of China.”

RELATED: Glenn Beck Stands By His Comments On Protesters: ‘It Ends In Violence With Marxists Every Single Time’

“I don’t usually go on shows where people descend to character assassination,” Hedges exclaimed. “If you want to discuss issues, that’s fine but this sounds like Fox News and I don’t go on Fox News!”

And the arguing just continued from there:

O’Leary: Excuse me, let’s debate the issues then. …

Hedges: You were the one who started it – you were not debating the issues.

O’Leary:[crosstalk] …I did not call you a nutcase, I called you a nutbar.

Hedges: You said [I] sounded like a leftwing nutcase .. bar

O’Leary: Are you left wing in leaning at least would you say?

Hedges: Can I finish?

Watch the interview below, via CBC: