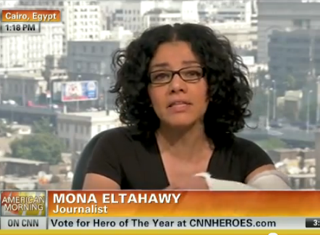 The pervasive brutality of the Egyptian police after the fall of leader Hosni Mubarak has been in the headlines since the Tahrir Square revolts of last spring and has shown little chance of stopping anytime soon. This week, the police assaulted Egyptian-American journalist Mona Eltahawy, who immediately took to the airwaves after being freed to describe in detail how the police broke her arms and allegedly sexually assaulted her.

Eltahawy, a longtime human rights activist and journalist who had been covering the Egyptian revolution since this spring, was detained on Tuesday, she says, on the pretext that she did not have her passport. As soon as she could, she tweeted “I AM FREE,” and then described in detail (and with pictures, first of her swollen hand and, later, of her casts) the abuses she underwent.

Eltahawy’s immediate reaction to the arrests and abuse was to go as public as possible with it. Tweeting that she has an article in the works about it (“just you fuckers wait“), she went on several CNN programs, most recently on American Morning today. She described being beaten and groped by a great number of men, noting that she had “lost count of the number of hands that were trying to get into my pants” and that she had been “dragged by the hair.” While the sexual assault has not been specifically confirmed, the Egyptian government hasn’t denied it, either.

The events occurred by the Ministry of the Interior, and Eltahawy to this day does not know why, exactly, she was singled out. “I can’t really tell you what they wanted,” she said on CNN this morning, noting that they had asked her for papers she had left in her room but she suspected once the police realized she was a human rights journalist they made sure to treat her roughly. “What happened to me is just the tip of the iceberg of the kind of abuse and brutality that ordinary Egyptians face every day,” Eltahawy concluded, adding that she was lucky to have the US State Department behind her, and that she was considering legal action.

RELATED: Lara Logan Reveals Details Of Her Attack On 60 Minutes

Eltahawy is neither the first woman nor the first journalist to suffer such abuse while covering the Egyptian revolution– the comparisons to the repulsive treatment of Lara Logan comes to mind– but the near-instant turnaround time from the attack to Eltahawy choosing to go public with her story is something completely new in the face of violent regimes. Part of this is due to the speed with which Twitter functions, but most if not all of the credit goes to Eltahawy for displaying a level of courage that is as humbling to the rest of us as it is admirable beyond words.

Eltahawy on CNN’s American Morning below: