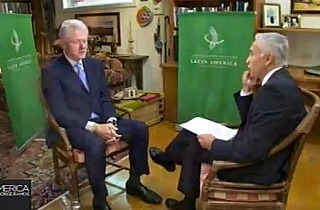 The repeated denials of Hillary Clinton’s closest confidants about whether or not the former Secretary of State is running for the presidency are beginning to bother the political journalists who cover both active and stealth campaigns for a living. On Tuesday, former President Bill Clinton sat down with Fusion anchor Jorge Ramos where he took a swipe at journalists who are covering a campaign that doesn’t exist. Some reporters did not take this comment lying down.

When asked if Hillary Clinton is running, Bill Clinton said that he does not know and that it was not a subject of any relevance in 2013. He added that the “four-year campaign” is bad for the country.

“We have newspapers that have people devoted to doing nothing but covering a campaign that doesn’t exist,” he said. “So, then they have to decide to create stories. You know, we don’t need that.”

The Huffington Post’s Jack Mirkinson flagged some of the more frustrated tweets emanating from political journalists who reacted negatively to this comment.

“If HRC doesn’t want to be covered as a likely 2016 candidate, she could just say she’s not running,” suggested New York Times political reporter Nick Confessore.

Others were more forgiving of Clinton’s admonition of the political press. Some, like POLITICO’s White House editor Dan Berman, suggested that even if Hillary Clinton denied she was running for the presidency, she would still be covered as though she was a likely candidate.