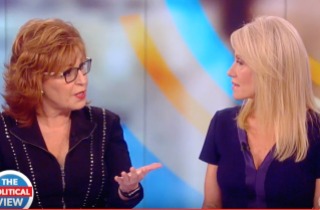 Donald Trump’s campaign manager faced a barrage of questions today when she discussed her boss’ latest actions on The View.

During Kellyanne Conway‘s Thursday appearance, she faced queries ranging from whether it was appropriate to attack Hillary Clinton through her husband, or for Trump to double down on his Alicia Machado weight-gain insults. Sara Haines noted that comments like those make women voters uncomfortable with Trump, but as Conway said she doesn’t “discuss people’s weights and their looks,” Joy Behar locked on and wouldn’t let the issue slide.

“Did you reprimand him for that and say to him, ‘Listen, why are you saying women are fat? Why are you calling women fat pigs?’” asked Behar. “Did you say that to him?”

Conway answered “yes” she did, but that the matter was “beside the point.” She went on to echo Trump by saying that the Machado’s modeling agency wanted to fire her for breach of contract, but Trump offered her a second chance by getting her to lose weight.

During the interview, Jedediah Bila also asked Conway about whether Trump was off his game by failing to effectively attack Clinton during their time together. Conway answered that Trump “hasn’t gotten a lot of credit” for being a “complete gentleman” to Clinton, both for referring to her as the former Secretary of State, and for not bringing up Bill Clinton‘s sexual history on stage (which he did later).