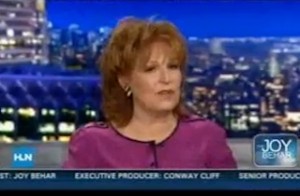 Joy Behar‘s show on HLN drew to a close on Thursday night after having been unceremoniously canceled just two years after making its debut. HLN will show re-runs of her old episodes, and, in January, will fill the slot with a re-air of Nancy Grace‘s broadcast from earlier in the evening.

While this week had already been a mini farewell tour for Behar, the end of her final show was a wild delight. During her panel, comedian Lewis Black, who surprised Behar by literally walking on to her stage, called HLN, “a network that’s hellbent to s**t on itself.” Behar then thanked the audience and fans, and invited her crew — “Call me for recommendations!” she urged potential employers — on to the stage with her for a champagne toast. After a final, “Thank you all for watching!” from Joy, the screen went black.

And then the brilliant surprise began.

Behar woke up in a bed, in an homage to the final scene of Newhart (complete with a framed picture of Bob Newhart on her nightstand), saying, “I had a terrible dream. I dreamt I had my own TV show, and I kept repeating the same stories, over and over again. Day after day, night after night — it wouldn’t end!”

The man in bed with her rolled over and sat up. It was Joe Scarborough. “Baby, baby, that wasn’t a dream…it’s cable news! Now go back to bed. I’ve gotta get up in a couple hours.”

She then turned off the light and the screen went dark again. And after a quick beat:

“Joe! Not tonight, I have a headache.”

Due to a technical glitch, we are unable to pull the actual clip from HLN, however the good people of Morning Joe covered it, so watch the clip of Behar’s final moments below, courtesy of MSNBC:

UPDATE: Here is the hi-res version, courtesy of HLN: