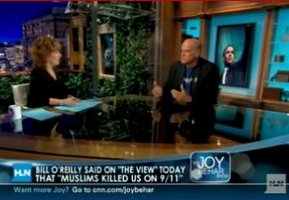 The Joy Behar/Whoopi Goldberg walkout on The View today during a tense debate with Bill O’Reilly received huge attention – enough that Behar had to address it while speaking to Jesse Ventura on her own program later in the day. From the sound of it, Behar wouldn’t change a thing.

Behar said she still views O’Reilly’s comment, “Muslims killed us on 9/11,” as “hate speech.” This is where the trouble is – Behar sees that sentence as being loaded and having all sorts of implications about lumping all Muslims in with terrorists, while O’Reilly views it as a statement of fact. And really, as long as you’re not a 9/11 truther…well, yes, people who claim to be Muslims perpetrated the 9/11 attacks. The vast majority of Muslims, of course, didn’t, are not terrorists, and are just trying to get by in America – a task indeed made much, much tougher by that radical, awful group with whom they share nothing in common – but O’Reilly’s statement was, at its most basic level, true.

Of course, the reason it caused such a stir in the first place was a fierce debate over the so-called Ground Zero Mosque. O’Reilly, of course, doesn’t think it should be built. Venture challenged this idea, and while he ventured into the aforementioned 9/11 truther territory and went on about how the O’Reilly/Hannity/Beck trio are the Three Stooges and Beck is Curly, did make some good Constitution-related points. Among them, re: building the mosque: “The Constitution says they can do it. It ends there,” and “The Constitution/Bill of Rights are there to protect unpopular things.”

Video of the segment below. While it’s interesting to hear two people as opinionated as Behar and Ventura spout off, when Behar and Goldberg literally walk out of an interview with O’Reilly…doesn’t O’Reilly win?