Joy Behar On The View: ‘Men Are Afraid Of Being Replaced By A Turkey Baster’
Video

Joy Behar On The View: ‘Men Are Afraid Of Being Replaced By A Turkey Baster’ 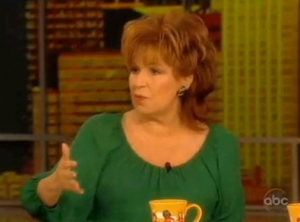 Earlier on today’s episode of The View, Barbara Walters noted that, while she didn’t want to get personal, “some of us [on the panel] are making more than our husbands.” (Sherri Shepherd seemed to nod at this point — interesting!) Walters wanted to know how, when women are the breadwinners, they can still make their husbands feel like they’re “on top…so to speak.” Joy Behar had a lot to say on the subject, first telling the panel that she and her longtime partner Steve have always maintained separate bank accounts, and then arguing that resentment of women who make more money comes from men’s impulse “to control women…all over the world.”

RELATED: Hasselbeck: Why Don’t Feminists ‘Burn Their Bras’ When Conservative Women Are Attacked

Walters then took the opportunity to make the rather provocative argument that the recent backlash over contraception might have arisen out of fear, as women continue to expand their earning power. Most of the panel seemed to agree with this, noting that it’s possible to have children out of wedlock with little social stigma (which is not really the same thing as “total reproductive freedom,” a point Hasselbeck raised when she noted the financial hardship that comes with single parenthood). Even women who opt to have children in middle age have a more difficult time compared to older fathers, Shepherd pointed out, because “it’s the woman who’s raising that child.” But if women have indeed become so powerful that the contraception debate has grown out of that fear, how can it also be true that single motherhood or being an older mother are still so difficult?

Always willing to take it one step further than strictly necessary, Behar joked that dudes are “afraid they’re going to be replaced by a turkey baster any day now.” Ahh, it’s all so clear now!