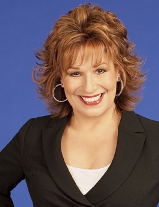 HLN host Joy Behar is down in Atlanta today, but it’s not to visit CNN’s corporate HQ.

She has been cast in the new Farrelly Brothers movie Hall Pass, to be released in 2011, as a TV shrink. We talked to Behar today from the set.

“The Farrelly Brothers asked me,” she tells Mediaite today. “I did not audition or read. They just wanted me in the film as the TV shrink, Dr. Lucy.”

So what type of personality should viewers expect to see when they Behar play Dr. Lucy? “I guess she’s kind of like a Judge Judy,” she says. “She’s very definitive in her thinking. She knows it, gets it. She’s not a tentative shrink, not one who asks you what you think. She knows what you think.”

In the movie she’ll work closely with two of the stars, Christina Applegate and Jenna Fisher, who are her friends, not clients – although that doesn’t stop her from giving them advice. “As all shrinks do,” says Behar. “I have friends that are shrinks, they’re always telling me things I should be doing.”

We also talked to Behar about her HLN show, which has grown in the ratings while attracting a wide variety of guests. “I really like my staff over there,” she says. “It’s a news show with comedy.” Her guests, says Behar, “run the gamut from Gore Vidal to Kate Gosselin. Where are you going to get that?”

She also has Ann Coulter on fairly regularly. “Ann and I seem to do it without any hostility,” she says. “I like to have her there.”