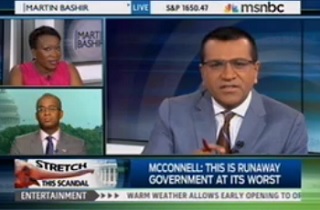 It’s tough to say which is the more thankless job, being the liberal guest on Fox News, or the Republican guest on MSNBC. On Thursday afternoon’s Martin Bashir show, GOP strategist Ron Christie endured one of the more uncomfortable aspects of the job, as host Martin Bashir and MSNBC contributor Joy Reid refused to let Christie pass “Go” until he admitted that the IRS commissioner who presided over the currently-hot IRS scandal was appointed by “the previous administration,” as George W. Bush is currently known around Washington.

Following President Obama’s quick firing of acting IRS Director Steven Miller, and promise to hold everyone involved accountable, Republicans are still trying to make a dollar’s worth of scandal out of fifteen cents. To tht end, Ron Christie appeared on Thursday’s Martin Bashir, and when asked if the President’s actions thus far have been sufficient, of course said “No, it’s not,” and called the IRS scandal one of the most chilling cases involved with the coercive powers of government.”

“This isn’t about President Obama,” Christie continued, this is about a culture within the Internal Revenue Service that seemed to think it was okay, that singling out people due to their partisan affiliation would be somehow fine.”

Joy Reid agreed that “it is chilling if the IRS can chill speech by auditing someone, or the threat of an audit,” but noted that “what we’re talking about here are groups going to the federal government and asking for a special dispensation from the tax code.”

“They’re saying ‘I want to be tax exempt. I want, essentially, a subsidy from the taxpayer, give it to me,'” Reid continued. “In this case, the IRS made them wait one, maybe two years to get their special tax subsidy. Whether it’s on the right or left, we’re not talking about the audit, or power to tax, as an issue. We’re talking about a special exemption in the tax code. Should anyone who comes to the IRS get that special dispensation? No. Should they investigate? Yes. The way they did it was a bureaucratic ineptitude.”

“Joy, this is not about bureaucratic ineptitude,” Christie disagreed, “this is about a culture within the Obama administration…”

That’s where he ran into trouble. “Wait a minute, the IRS is not the Obama administration, Ron,” Reid shot back.

“That is a flat-out lie,” Christie replied. “The IRS commissioner is a political appointee by the president.”

Finally, Bashir stepped in. “Ron, I accept your assertion. Joy is asking you very politely to answer that question. Who appointed the head of the IRS?”

A stubborn Christie intoned “The IRS commissioner is appointed by the President of the United States.”

Christie continued to argue that the IRS is not independent, because the President was able to fire Miller (or to demand his resignation), but that’s the key difficulty that the President’s opponents will have with this scandal, going forward. In order to argue that the misconduct was the result of an administration culture, they have to pin this on George W. Bush, but the credit for fixing it will all go to President Obama.