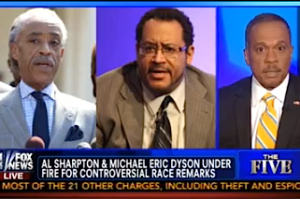 Juan Williams began The Five Tuesday afternoon by calling out “two of the worst” offenders from the “so-called civil rights” movement for “demonizing white people, especially conservatives like Bill O’Reilly, so they don’t have to deal with the real problems that continue to plague the black community.” Williams singled out MSNBC’s Al Sharpton and Michael Eric Dyson as “frauds” and “hustlers.”

As examples, Williams presented two recent clips from MSNBC. In the first, Dyson suggests that O’Reilly was recently “surprised that black people don’t throw bananas at each other or swing from trees.” In the second, Sharpton is seen accusing people like O’Reilly of “exploiting the differences between us for their own advantage.”

“Let me start by saying this. [Dyson] is making the charge basically that O’Reilly portrays black people as animals, and of course this never happened, this is not true,” Williams said. “He wants to hold up somehow that Bill O’Reilly is a racist and the target of the conversation and therefore we should be about somehow going after Bill O’Reilly. Who does that help?”

Dana Perino noted how “amazing” it is that three weeks after the George Zimmerman verdict, the press isn’t talking about Trayvon Martin or other black teenagers, but rather focusing on these media figures. “It is amazing how Al Sharpton is able to turn the attention to himself,” she said.

Andrea Tantaros agreed with Williams as well, saying that Sharpton, who “represents a minority of the black community,” is actually doing them a disservice. “Instead of encouraging them to focus on positive messages like studying, and finding a job, and working hard, and being a good dad or good mom, he is empowering them to sit in their house and be angry at Bill O’Reilly. How unproductive.”

Tea party radio host David Webb, who was sitting in with The Five crew, upped the ante by calling Dyson the “political race huckster love child” of Sharpton and Jesse Jackson. He called Dyson “dishonest” and said he and Sharpton “don’t represent the black community.” Along with President Obama, Webb said these men “separate us into groups and amalgamate us for their own power and control… It’s profiteering.”