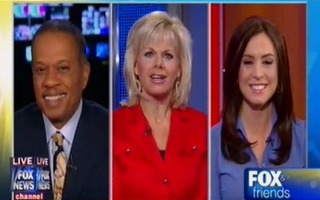 Fox News contributor Juan Williams and The Five co-host Andrea Tantaros got into a heated exchange on Fox & Friends over the legitimacy of President Obama’s proposed “Buffet Rule” and the nature of the President’s push for “fairness” as a central pillar of his reelection effort.

“Is ‘fairness’ a fair enough argument to win a second term,” asked co-host Gretchen Carlson. She then turned to Tantaros and asked her if the Obama campaign was relying too much on “buzz words like ‘millionaires’ and ‘billionaires’” when perhaps they should be engaging the public with more specifics about proposals like “the Buffet Rule.”

“That’s how he got elected,” said Tantaros. “It was all bumper stickers; ‘hope’ and ‘change’ and the ‘fierce urgency of now.’ This administration is not one of details.” Tantaros said that all politicians utilize poll tested language on the campaign trail and, in a sense, the Obama campaign’s reelection messaging is a reflection of past tactics that have worked for other political leaders.

However, Tantaros said that sloganeering is all the president has because “when they’ve tried to get into the details, they always lose.” She pointed out that the administration’s projections on unemployment after the stimulus bill was passed were unmet. “They assume that we’re dumb enough to believe what they’re pushing,” Tantaros concluded.

Carlson turned to Williams, “Juan, are we dumb enough? Is that why they don’t get into the details?”

“I just disagree with the premise, Gretchen,” said Williams. “I think that Andrea’s right, politicians love buzzwords and slogans, but in this case there’s lots of meat on the bone because it’s very clear that they’ve laid out that the Buffet rule – 30 percent tax rate on millionaires – so that they would not be paying a lower tax rate on investment than people pay on earned income is the heart and soul of the rule. So I don’t know how you can complain there’s not meat on the bones.

“They’ve changed the meat on the bone though, Juan,” interrupted Carlson. “At first the president said that was going to go to reduce the deficit, and now they’re admitting that actually it has nothing to do with reducing the deficit because when you do the math it doesn’t and now they’re saying that it’s just all about fairness.”

“It’s not a huge chunk of money, by the way,” said Williams. “I think if that’s your point, you’re absolutely right.” Williams said that things like the Bush tax cuts and the payroll tax cuts has reduced the tax burden on the wealthiest Americans while simultaneously increasing the tax burden on the middle class. “In addition to cutting entitlement spending to reduce the debt, we have to have some increase in tax revenue from people who have been blessed to live in America.”

Tantaros rebutted that most major media outlets have now come out and said that the president’s “Buffet rule” was a gimmick. “Just look at how the White House treated the American public last week when he bungled the precedent on the Commerce Clause. You know what the excuse was? We, the American electorate, we didn’t understand what the president meant,” said Tantaros. “That is the core and the crux of liberalism – they know better.”