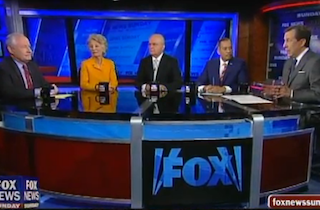 Chris Wallace‘s panel on Fox News Sunday tackled the overlap of the gun debate and recent events in Boston — which some, including Wallace, have already noted. Looking at the Senate’s failure to pass a measure expanding background checks, the guests clashed over whether Boston attack will make the gun control push even more difficult.

Noting those gun rights advocates who’ve already questioned how many of those in the lockdown region may have felt safer with a gun, Wallace introduced the way the gun debate has, in some instances, bled into the events of last week.

Bill Kristol didn’t feel the situation in Boston would affect the gun debate either way, adding the debate was won “on its merits” by the pro-gun advocates. Wallace recalled President Obama‘s angry reaction following the failed Senate vote on a measure that would have expanded background checks — and questioned whether the recent concerns over security make gun control “an even steeper climb.”

“I don’t know how much steeper it could be,” Jane Harman replied plainly, adding that the momentum has been “diluted.” It “makes absolutely no sense for the Republican Party to circle the wagons,” she asserted, elaborating how the recent Senate measure wasn’t proposing massive restrictions.

Wallace went on to ponder whether the gun defeat raises question’s about Obama’s ability to “work his will” in ways that some of his predecessors have been able to. Juan Williams, right off the bat, disagreed with the idea that the Senate vote was a large defeat. Reiterating Harman’s point about the bill being a compromise, Williams commented, going on to ask, “Should they have not ever focused on assault weapons? Should they never have focused on high-capacity magazines? Did that waste time?”

When it comes down to it, though, Williams pressed the need to focus on the “dysfunction” in the Senate, illustrated by its failure to pass a measure that had significant support. Conversely, Kristol criticized the president’s “meltdown” in the Rose Garden and his inability to effectively make the case for gun control. Williams immediately jumped in to argue that point, insisting that the public policy argument is abundantly clear.