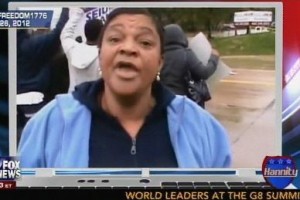 Tonight Sean Hannity revisited last year’s conservative outrage over a federal phone program thanks to a new video by undercover filmmaker James O’Keefe showing people distributing the phones even with the understanding that the people getting the phones might sell them to buy drugs or shoes. Juan Williams and Deneen Borelli got into a heated back-and-forth over the effectiveness of the program and whether it’s a clear example of massive welfare fraud under the Obama administration.

RELATED: O’Reilly Gets In Shouting Match With Juan Williams Over IRS: ‘You’ve Been Pretty Crazy Lately’

Borelli found it outrageous that people can just take government entitlements and “sell them for whatever they want to sell them for,” citing it as an example of the kind of “waste, fraud, and abuse going on because of bloated government.” Williams shot back that at the idea that this is taxpayer money going to waste, saying it’s a universal service fee charge and it goes to poor people who use the phones to contact prospective employers.

Borelli noted that it’s millions of people who get these phones, to which Williams remarked, “I’m sorry we have that many poor people.” Williams also dismissed the “Obamaphone” moniker, pointing out that it started under George W. Bush. He said it’s a good program with “fraud that has to be addressed,” but Borelli insisted it’s a wasteful program trying to provide people with “all of their wants and needs,” saying that she knows people with home phones who have also gotten the cell phones.

Williams and Borelli continued to clash over whether the program is a tax or a fee, with Williams singling out a congressman calling this “corporate welfare.” Hannity insisted that the program allows too many people to “take advantage of taxpayers’ money” to buy drugs and Louis Vuitton handbags. Borelli suggested giving out the phones during an election year couldn’t be a coincidence, but Williams continued to bring up the Republican origins of the program.

The segment ended with Williams and Borelli going back and forth over whether the cell phones are necessary for poor people to get jobs. Borelli concluded, “Look at the facts, Juan, we’re talking about the facts.”