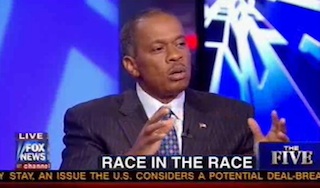 A few days ago, Herman Cain made headlines when he said that he didn’t “believe there is racism in this country today that holds anybody back in a big way.” Shockingly, some people disagreed. Two of those people are Cornel West and Tavis Smiley who have spoken out against Cain a number of times including during their appearance last night on The O’Reilly Factor when they said he was “trivializing” a serious issue. Today on The Five, Greg Gutfeld had a different interpretation; that Cain, unlike West and Smiley and the rest of the Left, just doesn’t feel the need to focus his entire life on race.

Despite being a liberal (and man of color) himself, Juan Williams agreed, accusing West and Smiley of merely being threatened by Cain’s success.

RELATED – Herman Cain On Obama: ‘Never Been A Part Of The Black Experience In America’

“Right on, brother. And I’ll tell you why I say ‘right on.’ Because West, Tavis Smiley, those guys are threatened by the success of Herman Cain. And I think that they feel that anybody who doesn’t buy into all the racism charges that they’re constantly- You know, in their world, President Obama doesn’t exist. You know, these are the same people who criticize Obama for not being sufficient. So imagine the way they feel.”

Williams went on to say that part of their complaint was that the Tea Party supports Herman Cain and they believe that he’s just a token to that Party.

Meanwhile, Andrea Tantaros compared it to women on the Left accusing Sarah Palin of being bad for feminism.