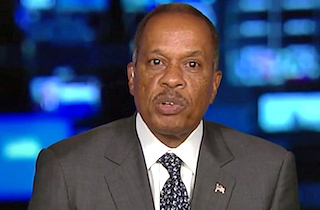 Fox News analyst Juan Williams was one of several journalists to participate in a closed-door meeting with President Barack Obama on Thursday, and though he couldn’t repeat what the president said, he did describe both the frustration and resolve of White House officials over the troubled rollout of the Affordable Care Act.

“I met with other senior officials at the White House, I can tell you they are in full fight mode over the Affordable Healthcare Act right now,” Williams said. “What you hear from these senior officials is they’re concerned about what happened with insurance companies; they wish the insurance companies hadn’t sent out the cancellation notices; and if they had, that they had simply call them renewals. They feel as if they had a major systems failure, a major management failure, and they’re trying to get back on track.”

“Their big concern right now is with people who had those cancellation notices and making sure those people feel they have been taken care of,” Williams continued. “They feel they have to turn that around, as the first step in trying to repair the damage that’s been done to this president.”

“Absolutely,” Williams said. “There is frustration, that’s clear from everybody who I was talking to this morning at the White House. They feel, even if you don’t get the website working—and they expect the website will work, that they will get a sustainable pool of people, maybe not as many people into the marketplace as they had projected, but they will get a sustainable pool—but they’re frustrated with the way that this has been portrayed in the media, because they say it has done some good. Bill Clinton couldn’t even get a vote on proposed health care reform. 100 years people have been trying to do this. This is hard work, as one of them said.”