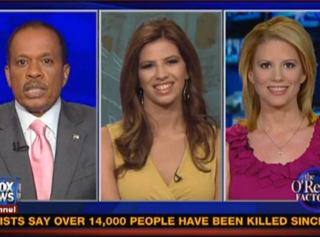 It has been some weeks since the Obama campaign began attacking Mitt Romney for his record with Bain Capital and the controversy over said line of attack subsided. With statistics on how those attack ads may have swayed independent voters in battleground states in the President’s favor, Juan Williams asked Michelle Fields and Kirsten Powers whether the attacks would be worthwhile in the long run.

“As a political attack, it is working very well,” Powers answered, noting the polls showed that areas where the Obama campaign aired the Bain attack ads, independent voters seemed to react positively. Fields called the ads “completely insulting to middle-class Americans,” especially the implication that President Obama was more in tune with the middle class that Romney. President Obama, she later continued, “is actually the one shipping jobs overseas,” making the attacks even more disingenuous despite the facts about Bain.

“Don’t get off the point,” Williams requested, which was the political expediency of the attacks. “If the mainstream media is on Obama’s side… yes, but is it true? No, it’s not true,” she replied. Powers thought the argument that “Obama did it too” was not going to help Romney because he had an image problem as an “upper-class, out of touch businessman” that the President did not, and “anything that feeds into that will work.” This even though some Democrats objected to the attacks. “Romney has to seize those opportunities with Clinton, with Booker,” Fields argued, to make the point that “you don’t need the one who is a professor.”