Juan Williams On Newt Gingrich Showdown: ‘I Don’t Think He Answered The Question At All’ 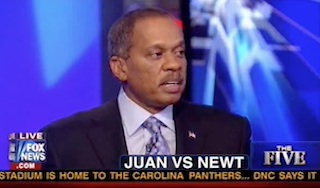 Even the most die hard of Bob Beckel fans out there would have to admit that today was a good day to have Juan Williams subbing in for him on The Five. Williams was back from his time moderating the debate in South Carolina last night and he and his co-hosts started off today’s broadcast debating his now-infamous showdown with Newt Gingrich. While Williams was the first to admit that this moment worked out better for Gingrich than he (he compared it to being “dunked on”), when asked how he felt the candidate answered his question, he argued that Gingrich didn’t answer it at all.

Said question from last night was about as well received with The Five‘s other Four as it was with the debate audience. Eric Bolling, Dana Perino, and Andrea Tantaros disagreed with Williams that any of the comments he had asked Gingrich about had had a racial tinge. Williams said he didn’t know how anyone could see them as anything but considering Gingrich literally said he was going to go to the NAACP and talk about food stamps.

Tantaros argued that Gingrich was just complaining about lazy people of all races since the Millennial Generation is clearly lazier than previous ones.* Williams responded quickly:

I guess Chris Matthews was actually right about one thing earlier, this racial stuff really is all in the eye of the beholder. You either see it or you don’t. Some people see the NAACP and see an organization that’s for, y’know, black people. Others see the NAACP and just see a universal stand in for lazy folks.

*This reminds me, I’ve gotta tell all the kids on the block to stop playing ball on Andrea Tantaros’ lawn.

Watch a section of the segment from Fox News below: