Judd Apatow Hammers Cosby on Today: You Shouldn’t Need Quaaludes to Get a Date
VIDEO

Judd Apatow Hammers Cosby on Today: You Shouldn’t Need Quaaludes to Get a Date 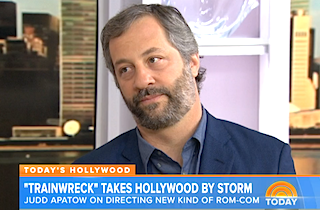 From his new book of interviews, Sick in the Head

to his latest movie Trainwreck, written by and starring Amy Schumer, coming out this week, Judd Apatow is having a big summer. But all anyone really seems to want to hear him talk about is his unlikely crusade against Bill Cosby.

During an interview with the Today show’s Willie Geist Monday morning, Apatow explained how and why he became the “leading voice” — at least in the comedy world — condemning Cosby after more than 40 women have accused him of rape.

“I just kept noticing that no one else was saying that this was a bad thing and there was just such a vacuum,” Apatow said. “I would have loved to not talk about it. It’s incredibly sad. It’s one of the most tragic things that’s happened in our business, and I think we do have to stand up for the women and say that we believe you.”

“A lot of people got terribly hurt,” he continued. “And you know, when you go out on a date you don’t need seven prescriptions for Quaaludes. I’m in show business. Famous people can meet women without the enormous prescriptions.”

Asked if he was surprised that more people haven’t spoken out against Cosby, Apatow added, “We should all be very hesitant about getting involved in anything. But when it’s 40 people, it certainly is time for everybody to wake up and say we should be concerned about the women.”

One comedian who has been prominently defending Cosby over the past week, even after court documents emerged in which he admitted to obtaining Quaaludes with the intention of drugging women, is The View’s Whoopi Goldberg. Apatow used Twitter to shame Goldberg last week, writing of the sedatives, “he admitted to giving this to women to get them to have sex. So what are you defending?”