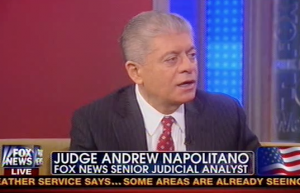 Can President Obama step in and end the sequester standoff himself? Such was the question Fox & Friends posed on Tuesday, bringing in Judge Andrew Napolitano to discuss. Hitting the president for his doomsday scenarios (should the cuts take effect in a few days), the hosts asked whether Obama has the power to wrap up the crisis du jour.

Napolitano argued that the sequester is not actually a cut in spending, but rather, a “reduction in the increased planned spending. It’s not a budget cut because there’s budget.” Taking a look at military spending specifically, he further noted that Obama has a choice about where to make cuts — and moreover that he has a constitutional obligation to “make the federal government work, and to make it do the things that we have hired it to do.”

On that note, Steve Doocy chimed in to note how Obama is scaring people. Indeed, he’s “President Panic.”

“This is the key word: pain,” Napolitano replied. “This is almost an impeachable offense — if the president is deciding how to spend money in order to hurt us rather than in order to provide us with the services for which we have paid and for which we have hired him, he is doing the opposite of what he has taken an oath to do.”

The crew went on to discuss Republicans’ role in the matter, at which point the judge added that the GOP didn’t give him any “leeway” but that such leeway is “integral” to his office.

“We elected you to run the government,” he concluded, “not to teach Republicans a lesson.”