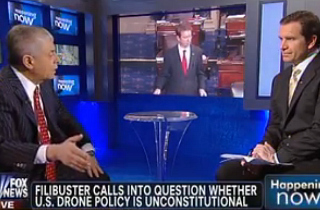 “Did he succeed in preventing John Brennan from becoming the head of the CIA? Probably not,” Napolitano conceded. “But I don’t think that was his real goal. I think his goal was to open up the eyes of the American public to the attitude of the White House which says that we can kill whoever we want, how we want, without even revealing it to the public, without revealing it to Congress.”

He slammed the White House for failing to properly address Paul’s concerns over how we “got here constitutionally” to a point where the administration is leaving open for interpretation their powers to use lethal force against an “imminent threat” on American soil.

“The Constitution couldn’t be clearer,” Napolitano continued. “If the government wants life, liberty, or property, it must take it through due process.”

The judge later lamented the fact that drones will likely become a popular tool of law enforcement on American soil, as the Air Force has stated that they expect to receive thousands of local applications for drone use. “It’s very, very dangerous that this is not a clear, and crystal, and pristine, and immediate ‘no'” from the administration on whether they feel they have the right to use drone strikes on American soil, Napolitano said.

“Anyone in the government who thinks the U.S. government should be able to do this needs to be restrained and needs an eye-opener. Yesterday, they got it,” he added.

Host Jon Scott then suggested “the Brave New World not that far away.”