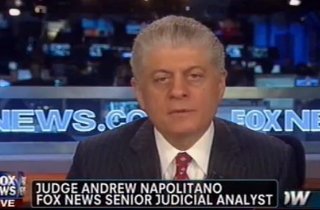 Appearing on Fox’s America Live this afternoon, Judge Andrew Napolitano applauded several states’ proposals to protect firearms made and kept within their states’ borders from any potential federal weapons bans. However, the outspoken libertarian conceded that despite how “ridiculous” federal law has become, the states will likely fail in their effort to shield themselves from the feds.

“If this were 200 years ago, and the Constitution were new, and it meant what it said, this legislation would make sense because at the time, Congress only regulated commercial goods that actually passed from one state to the next,” Napolitano explained of the proposed laws and their relation to the so-called “interstate commerce clause.”

“But that clause has been so blown out of proportion, by presidents and Congresses and Supreme Courts, that Congress can now legislate anything it wants, even something that moves from one state to the another,” the judge lamented. “And even something that isn’t commercial in nature simply because, in some theoretical way, its movement or not movement might have some effect on interstate commerce.”

Host Megyn Kelly likened that to how during the debate over ObamaCare, the president argued that the law fit under the “commerce clause” — a point which the Supreme Court rejected, instead saying the law was legal under the Constitution’s “tax and spend clause.” Nevertheless, Obama based his argument on Wickard v. Filburn (1942), which allowed the government to regulate a man growing wheat in his backyard for personal consumption under the commerce clause. That case has set the precedent for many subsequent court rulings.

As such, Kelly asked, “Why would the states try to tee up the challenge of going to the Supreme Court in light of pretty clear precedence that the federal law will prevail?”

“If enough states agree, Congress might back down,” Napolitano theorized. “Remember, states can look at the Constitution if enough of them want to.”

He also suggested that perhaps this Supreme Court — which has twice within the last five years upheld the individual right to keep and bear arms in states and cities — would refrain from further interfering with that right and “carve out an exception” for congressional regulatory powers.

However, Napolitano conceded the unlikelihood of these states’ proposals actually gaining traction: “As much as I love this legislation and wish it would be constitutional, it’s directly opposed to 60 years of jurisprudence that lets Congress do anything it wants.”

Despite the Supreme Court rejecting Obama’s use of the commerce clause for the Affordable Care Act, Napolitano and Kelly said the Wickard ruling would likely be applied here. “This is ridiculous lines of argument, it’s rationalizing a way for the Supreme Court around the Constitution’s intent, but this is how lawyers and members of congress and judges work,” the judge said.