Judge Napolitano: Google Is ‘Defending Freedom’ By Not Taking Down Innocence Of Muslims Video 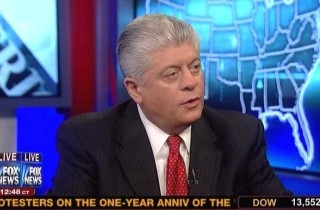 By not taking down the controversial Innocence of Muslims trailer from YouTube, Google is “defending freedom,” Judge Andrew Napolitano told Fox’s Megyn Kelly this afternoon during a segment of America Live.

Despite the White House asking the company to “review” the video the administration openly blames for last week’s anti-American violence in the Middle East, Google has opted to keep the 13-minute-long “trailer” available for viewing in the United States.

“Taking this down would be a quick and down and dirty solution,” Napolitano said of the White House’s seeming desire to remove the video. “The reason I say ‘down and dirty’ is because the solution for bad speech, hate speech, junk speech, garbage speech, whatever you want to call this is not censorship, it’s more speech. But censorship is a lot easier for the White House.”

Napolitano also spoke of the free speech implications that would come from the White House successfully getting YouTube to remove the video: “The First Amendment governs the government, it doesn’t govern Google. So Google is free to take down what it wants on YouTube. But whenever the government puts a little pressure on somebody, tries to get them to do something it wants […] with respect to speech the courts call that ‘chilling,’ meaning that Google would think twice in the future about doing something like this because, oh, we don’t want to have to deal with the government.