Judge Napolitano On Bin Laden’s Death: Is Obama ‘Pulling A Fast One’ To Save ‘Lousy Presidency’? 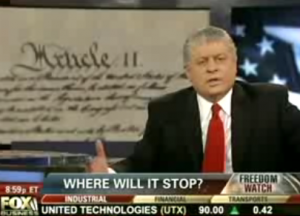 Well it didn’t take long for the praise of President Obama to end. Last night Judge Andrew Napolitano agreed that it was good for the monster Osama bin Laden to have been taken out; however, he also warned that Obama killed something that will make our world much more dangerous. The rule of law also died at the hands of Obama, according to Napolitano, and as a result, he feared who Obama might kill next.

Napolitano noticed the joy and unity around the country and claimed he hopes there isn’t too much of it, since:

“The same President who ordered the killing of bin Laden also wants to borrow trillions of your dollars that your children and grandchildren will need to repay so as to finance his welfare and warfare state. The same President also authorized missiles and drones that killed Libyan dictator Gaddafi’s infant grandchildren last weekend. . . President Obama, with an eye on his lagging poll numbers and the sickening economy over which he presides.”

Napolitano also admitted that his emotional and patriotic sides rejoiced at the news of bin Laden’s death, but his moral and legal sides realized that governmental assassination is very dangerous and unlawful. Napolitano argued:

“Beyond the issue of whether the government is telling us the truth or pulling a fast one to save Obama’s lousy Presidency – is the issue of the lawful power of the President to order someone killed, no matter how monstrous, how dangerous or how unpopular.”

Napolitano wondered could the President authorize the killing of anyone he deemed an enemy and sarcastically asked could Obama next kill Glenn Beck or Rush Limbaugh?

Napolitano usually brings unique and strong arguments to the table as he often focuses on what behavior is permissible under the Constitution and not prohibited by federal regulations, rather than focusing on blind partisan critiques. Therefore Napolitano’s analysis of what limits, if any, still exist on an Executive Branch of the United States government that goes to war and orders killings without Congressional approval, is certainly an intriguing topic. However, when Napolitano implies that until we see evidence, it’s possible that Obama or anyone in the government might be lying about whether bin Laden is really dead just to improve Obama’s poll numbers, such conspiracy talk is ultimately beneath Napolitano and his often enlightened discussions.