Judge Napolitano On ObamaCare Ruling: ‘Gives Power On A Platter To Congress’ To Tax Anything
video

Judge Napolitano On ObamaCare Ruling: ‘Gives Power On A Platter To Congress’ To Tax Anything 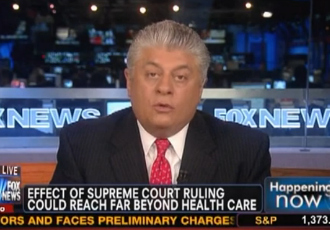 On Tuesday’s edition of Fox News’ Happening Now, Fox’s in-house libertarian judicial analyst Judge Andrew Napolitano gave his take on what the Supreme Court’s ruling that ObamaCare’s health-insurance mandate is a tax means for the future of federal power. Inspired by the Beatles’ song “Taxman” (which we listed as one of the 10 songs guaranteed to annoy liberals), Napolitano made the case that this ruling gives the federal government “power on a platter” to tax everything under the sun.

“The Supreme Court has invited the congress to regulate private behavior, behavior that is not delegated to the Congress by the Constitution to regulate, so long as it uses its taxing power to do it,” Napolitano said, adding that Justice Antonin Scalia’s “broccoli tax” comparison actually holds weight because under this ruling, “the government can order you to eat broccoli, and then fine you if you don’t by calling the fine a ‘tax.'”

We definitely don’t know what Congress will do with that power, but we do know what some progressives wish they’d do with it. You may recall how yesterday on MSNBC, The Cycle co-host Touré explained that after we unwashed masses learn to love the mandate/tax/whatever, our government can ascend to a new level of power, mandating things like compulsory voting, public service, and pre-marital/pre-divorce counseling.

Napolitano then made the case that this ruling sets a dangerous precedent for what sort of actions government can place a tax on:

“When we pay our taxes in April, we’re paying taxes on income that we earned. We went out and earned it. When you put gas in the car, you’re paying a tax on the gasoline that you bought. If you use tobacco products, you’re paying federal taxes on tobacco products that you purchased. In each of those cases you are affirmatively engaging in behavior that you know is taxable. But this is the first time in the history of the country that the Court has permitted the Congress to tax people for doing nothing. To punish them for refusing to do what the government wants them to do. That is a very, very dangerous precedent.”

Host Jenna Lee then asked Napolitano if there is “another legal argument that can restrain [the government] so it doesn’t go into those areas?”

Napolitano responded that either someone could pay the tax and then challenge its constitutionality in court, “because federal law does not let you challenge a tax until after you have paid it.” Or the other possibility is that a new Congress and president could undo the “tax” by voting for an overturn.