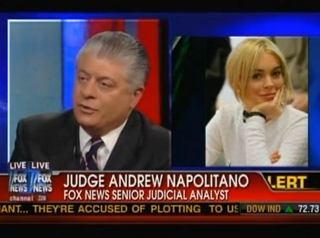 Law-breaking pop starlet Lindsay Lohan may have cultivated an image as more of a hedonist than a proper libertarian, but her recent Twitter comments against the Federal Reserve are winning her all sort of new fans. Latest on that list is Fox Business’ Freedom Watch host Judge Andrew Napolitano, who told Neil Cavuto on Fox News’ Your World today he “loved” Lohan and that she “makes a very good point” about the Fed.

“This just in,” a dramatic Cavuto introduced his segment– “Lindsay Lohan has had it, and we are so on top of it.” Cavuto praised “our tight-dressed doll” for pointing out that the Federal Reserve printing so much money has caused very high food prices, and let Judge Napolitano take it away. “I love her!” he exclaimed, laughing, fleshing out the theory in her tweet. “A reason food prices have gone up is because we have too much money chasing too few goods… the natural reaction is inflation.”

While the segment was mostly light-hearted, Judge Napolitano explained that there was a very serious point to be made about the appeal of small government when stars like Lohan take to their public pedestals to decry the policies of the Fed. “I think that Ron Paul and a lot of other sound-dollar, small government people have succeeded in generating the conversation in this direction,” he explained. “The fact that Lindsay Lohan is talking about the Fed is anecdotal only, but representative of a vast array of voters who understand what the Fed does, how it’s out of control, that it has no transparency, that it can run its own foreign policy, that it has more money to spend that Congress does.”

In the end, Lohan’s politics seem to have won both Cavuto and Judge Napolitano over, as the latter concludes that her thinking has led her to the same conclusions they have both arrived at. Between her “No H8” avatar on Twitter and her attacks on the Fed, Lohan may be positioning herself to be one of the most prominent libertarian celebrity voices in America– now if she could just keep herself out of the courthouse.

Update: Lawrence O’Donnell reported on this tweet tonight, and revealed that it had been bought.