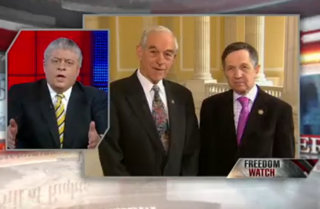 How did President Obama go from “anti-colonial” to “neo-colonial” in less than a month? Judge Andrew Napolitano took a detour from the regular civil liberties/end the Fed fare on Freedom Watch today to take a look at the specific, bringing together the left and right Congressional extremes to join in opposing further military action in Libya. To guests Congressmen Ron Paul and Dennis Kucinich, President Obama’s actions signal not only flagrant disregard for the Constitution, but put Obama dangerously close to spearheading an “imperial presidency.”

Judge Napolitano didn’t leave much space for interpretation as to what his stance is on the “unconstitutional and undeclared war of choice” in Libya, introducing the two Congressmen with a mini-commentary in which he argued that “Libya posed no threat to the United States and yet bombs away, morals and the Constitution be damned!” He found much agreement with this stance from the Republican and Democratic representatives, who both repeated several times that military action without congressional approval was unconstitutional. “It exceeds the War Powers Act, exceeds the mandate,” Rep. Kucinich argued, concluding that the Obama administration is “dangerously close to being an imperial presidency.”

Rep. Paul agreed, but refused to ignore the bigger picture: “we have 900 bases around the world… that’s where the problem is.” He also subscribed to the imperial vision of Obama’s action, calling the invasion “a form of neo-colonialism,” but blaming it also on “neo-conservatives’ efforts to remake the Middle East and the whole world.” Rep. Paul did add that “we do get a lot of encouragement from young people” and had hope that the efforts of young people would get America out of Libya as quickly as possible.

The opposition to the efforts in Libya from both sides of the aisle– when represented by Rep. Kucinich and Rep. Paul– isn’t remotely surprising, but the neck-snapping narrative shift from a month ago, when Newt Gingrich was slamming President Obama for being “Kenyan” and “anti-colonial” to him now being “imperial” and “neo-colonial” is striking. One wonders in light of the Libya intervention whether the more conservative right will stick with Gingrich’s assessment or go with Rep. Paul’s.