Judge Napolitano Says ‘Yes,’ GSA Scandal Is ‘A Conspiracy To Defraud The Government’ 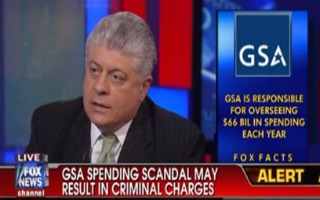 In a discussion about Congressional investigations into a series of wasteful spending measures made by current and former GSA officials, notably the inclusion administrator Jeff Neely’s wife on a trip to a lavish Las Vegas conference as a birthday present, Varney asked Napolitano if the alleged misuse of taxpayer dollars constitutes “criminal activity.”

“What would be the crime,” asked Varney.

“The crime would be theft of services, or theft of government property yin the form of having the government pay for something that you yourself received to which you weren’t entitled,” answered Napolitano.

Varney asked Napolitano to opine on the nature of the penalty for such a criminal violation. “20 years in jail,” replied Napolitano. He was not entirely certain, however, if such a penalty would be levied in this particular case.

“I’ll tell you what’s not a defense though – this has always been going on or we did it before,” said Napolitano. “The attitude that I will do it if I can get away with it because my predecessors did – no court would even permit that argument to be made.”

“Can I let my libertarian side show a little bit,” prefaced Napolitano. After Varney granted him permission to indulge his instincts, Napolitano said that the recently exposed actions of several groups of government employees are the result of a culture in government that believes it can get away with defrauding the taxpayers.

This is a result of big government that thinks it can do whatever it wants. The Congress behaves this way, the president behaves this way and the courts look the other way. Now the employees of these people behave this way – we will do what we can as long as we don’t get caught. Look at the Secret Service guys. One of them didn’t pay $47, as a result of which we now know what apparently goes on when the Secret Service goes away. It’s dangerous. It’s not criminal in their case, but it’s dangerous.

“About this Vegas trip – five scouting trips were made,” said Varney. “They held meetings with the hotel. They negotiated with the hotel for a room rate that was below what the government would allow them to charge. In return, they agreed to charge an extra $40,000 in food from the hotel. It was a deal. Does that sound like a conspiracy to defraud the government?”

“Yes it does,” answered Napolitano unequivocally. “Now, look. This is the earliest stages of these investigations. Mr. Neely is entitled to all the protections under the Constitution. It was quite proper for him to invoke his Fifth Amendment right. Only Jon Corzine denies a charge before a charge has been filed when he is under oath before Congress.”

When asked finally if there were criminal charges pending in this matter, Judge Napolitano said that it was probable and “there ought to be.”