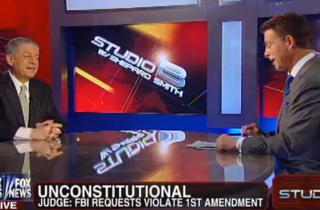 Reacting to a San Francisco federal judge’s ruling that the FBI’s secretive requests for customer information under provisions of the PATRIOT Act is “unconstitutional,” Fox News judicial analyst and outspoken civil libertarian Judge Andrew Napolitano explained how the government uses the law to attempt to extract information without a judge’s approval; and noted that the law only struck down a provision that prevents the free speech of the recipient of a “national security letter.”

On Friday, the San Francisco judge ruled unconstitutional the FBI practice of sending secretive “national security letters” to banks, phone companies, and other businesses. Under the PATRIOT Act, the feds are able to send such letters to companies, demanding information without any judicial review. The recipients of such letters are forbidden from making them public.

That gag order on the letters’ recipients violates the First Amendment, Napolitano explained, adding that “Congress shall make no law infringing the freedom of speech, so how could Congress make it a crime for people to talk about the government seizing private information without going to judges first?”

Host Shepard Smith added that there are likely “much more to come” in court cases attempting to review the PATRIOT Act. “It was matter of when we all settled down and remembered the Constitution,” he said of when people would start to care about the controversial provisions contained within the 2001 law.

“Going to be interesting to see what has been done without anyone’s knowledge,” Smith remarked.

“Over 350,000 of these national security letters have been served since 2011,” Napolitano warned. “Do you think anybody we know has been the subject of them?”