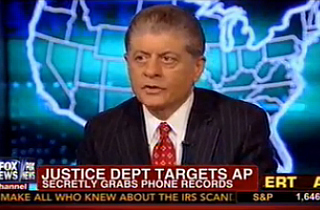 Reacting to Attorney General Eric Holder‘s Tuesday afternoon press briefing on the Department of Justice’s secret seizing of Associated Press phone records, Fox senior judicial analyst Judge Andrew Napolitano tore into the agency for its “direct assault” on the Constitution that he says circumvented the proper channels laid out by the law.

On Monday afternoon it was revealed that the DOJ had obtained the private phone records of Associated Press reporters and editors. In response, Holder explained today that the seizure was part of an investigation into one of the worst leaks he has ever seen in his legal career, one he believes could have compromised national security.

Napolitano was not convinced, calling Justice’s actions a “profound and direct assault on the First Amendment.” He explained to Fox host Megyn Kelly that the feds have three different methods to legally seize documents from an outlet like the Associated Press: 1. “Grand jury subpoena, in which case the U.S. attorney has to tell the person, ‘We are going for your records.'” 2. “Go to a judge and present evidence of probable cause of crime to get a search warrant.” 3. “Obtain a national security letter, in which a federal agent writes a search warrant authorizing another federal agent to get the documents under the PATRIOT Act.”

The third option, Napolitano added, “is unconstitutional, but it is the law.” But as the judge sees it, the only crime that’s been identified by Holder thus far was the “crime of leaking,” which does not constitute a national security threat.

And so without following any of the three steps to legally obtaining documents under federal law, Napolitano told Kelly, the seizure “was absolutely done improperly and it violated most the core protected rights under the Constitution: freedom of speech.”